Previous exhibition :: intimate presences/affective absences (or, the snake within)

I heard the snake was baffled by his sin

He shed his scales to find the snake within

But born again is born without a skin

The poison enters into everything

Leonard Cohen, Treaty, from the album, You want it Darker (2016)

As the first installation of the spectral matters/phantom pursuits project, this installation was the culmination of 4 years of experimentation with biomaterials. It consisted of 20 lightboxes, each featuring impressions of domestic objects made from biofibre grown from a mother culture of yeast and bacteria. The work was displayed in a darkened space which evoked the sense of an abyss and was accompanied by faint strains of piano music. As a result, the lightboxes seemed to hover in mid-air, making navigation around them precarious and uncertain. This sense of disorientation was reinforced by the false wooden floor that had been installed in the space, which was unstable in places. The effect was of liminality; an otherworldly, unsettling, mysterious space of in-betweenness, redolent with affective evocations of the uncanny.

The impressions of domestic objects that feature in this installation are made from a cellulose-fibre produced by the symbiotic action of the bacteria Gluconacetobacter xylinus and yeast. This culture, which feeds off a mixture of tea and sugar, forms a biofilm at the interface between the liquid nutrient and air. The biofilm grows to form a cellulose fibre that when dehydrated, bears uncanny resemblance to traces of human skin – sloughed off, shed, discarded. In their initial forms as material matter, the impressions inhabit an ever-changing state of in-betweenness, slipping in-between life and death; visibility and invisibility; human and other-than-human; actuality and imagination; being and non-being; living and non-living. 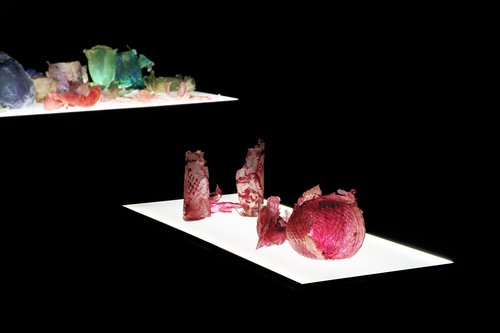 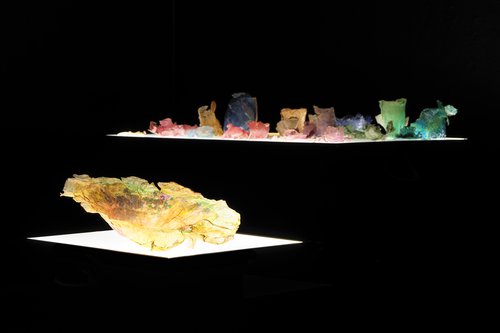 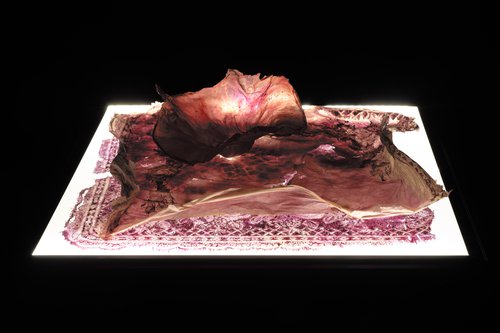 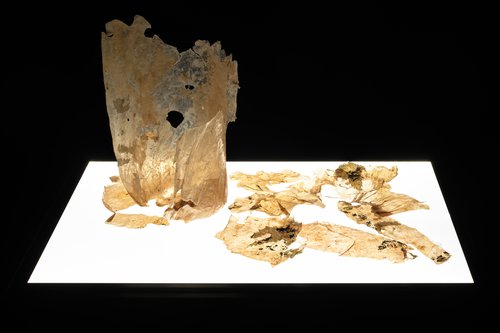