In this work, Paul Emmanuel continues his nuanced exploration of the contradictions and vulnerabilities of masculinity. The headless torso has phallic attributes, a logic reinforced by the male lion and the upstanding springbok and gemsbok antelopes, consistent with the emphasis in classical heraldry on masculine prowess. Yet the absence of a head at the top and the cut-off of the figure just above the groin might suggest the risk of castration or of diminished virility and strength (the "Vires" of the title.) It may be that the absent head is refracted in the abdominal region of the torso as a miniature face: the navel or belly button could be read as an eye, embedded in a face in profile facing to the right. If so, it may be significant that this solitary "eye" is formed by the enduring trace of the umbilical cord that bound this male being to his mother: the seat of knowledge of the world is inextricably bound up with the feminine principle.

As it happens, the oldest device in the upper left quadrant of the shield or escutcheon, held aloft by the standing horned antelopes, is the Maiden or Lady of Hope grasping an anchor, a symbol of the Cape Colony dating back to 1715. (The older term, the Cape of Storms, had been replaced with the more attractive phrase, "Cape of Good Hope," with the expectation of drawing more settlers to the region.) The anchor is an ancient Christian symbol of hope, dating back to the Roman era of persecution and hidden worship; it evokes both the crucifix, and, it is sometimes said, the female-coded crescent moon, implying the sanctuary of a nurturing safe harbor in a storm-tossed world. Emmanuel may well find it appropriate that at the heart of this hyper-masculine device, long associated with martial violence, conquest, and domination, are found evocations of the divine feminine.

Indeed, the overall composition of the work shares some features with the Chinese taijitu or "yin-yang' symbol, the two interlocking spirals that evoke the dynamic, unified duality of existence, including the interdependent and interpenetrating aspects of maleness and femaleness, each opposite force present in the heart of the other.

At the conclusion of The Great War and Modern Memory (1975), Paul Fussell characterizes his work of literary and cultural criticism as excavating "our buried lives." Paul Emmanuel, in his own registers, is committed to comparable works of excavation, in which his own body, or the bodies of those he loves, figure as canvas, multilayered landscape, and even, as Pam suggests, a kind of living graveyard. In The Lost Men France, as noted above, Emmanuel physically pressed the rediscovered written names of soldiers of the Great War into his flesh, embodying their distant absent presence as a way of honoring and recovering their enduring, dimly apprehended legacies in our present world. In Ex Unitate Vires, he carefully excavates his own bodily image, refracted on the delicate shroud-like surface of carbon paper. In so doing he reveals, tattooed over the body's heart, the now defunct national signifier of state-sponsored masculinity, the Coat of Arms. Digging deeper, he takes us traveling into a realm where the old certainties, predicated on the triumph of patriarchal, heteronormative whiteness over its antitheses, dissolve and fluidly recombine. Out of a mythic "unity" that long denied sexual, gender and racial diversities, a newer and deeper unity is being unearthed from our buried lives, and, at long last, is ready to be born on the turbulent surface of the national body. 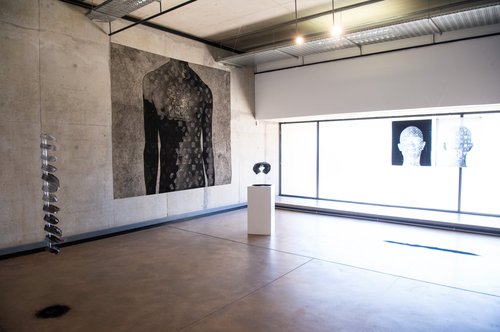 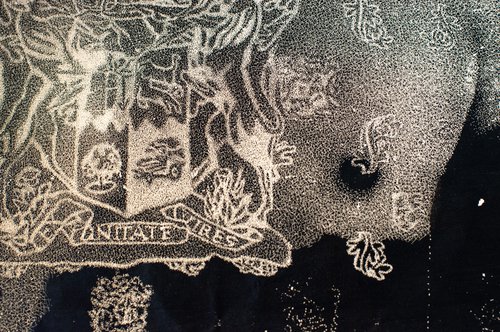