Clothes are our outer coverings, they determine what we want the world to see of us, either by circumstance or choice, forming the first impressions we make. They are an outer ‘skin’, which, like the dried remnants of insect exoskeleton or snake scales, are shed, washed, re-worn or replaced. They are intricately involved in our evolution and transformation.

I have always been fascinated how clothes act as signifiers and by how the design of a contemporary men’s business suit is a sort of ‘paired down’ version of a military suit of armour. For me, the business suit – and in particular the jacket – protects the wearer from the commercial and political onslaughts experienced in boardrooms and Offices of State – battlefields of a different sort. I also noticed that a school blazer and a formal men’s business suit jacket, both follow the exact same design.

John Harvey in his novel ‘Clothes’ tells us that, “There are power suits, which warn you that it is in your interest to trust them. Discreetly padded and moulded, they sculpt a power body, strong in the shoulder and mobile at the waist: both the suit, and the implied body, speak determination. They say: you can trust me to run the firm or the nation, because you see I can run my body – govern it and keep it fighting fit. Power suits are sheaths, with the purpose of making the wearer resemble a sword. They offer, if they work, efficiency, success, money.” 1

I scratched the business jacket out of sheets of solid black carbon paper and ‘stitched’ them together with archival adhesive tapes, following a commercially bought pattern. I wanted to render the solid form of the jacket transparent, to ‘see’ through its shielding.

The smaller, blue school blazer I left mostly unscratched, to denote a less marked and unblemished surface. Only the stripes and laurels of the blazer have been scratched out, revealing the commercial branding of the silver ‘lining’ within.

I envisioned the two jackets relating to each other as Father and Son, with a notable, respectful distance between both absent ‘figures’. 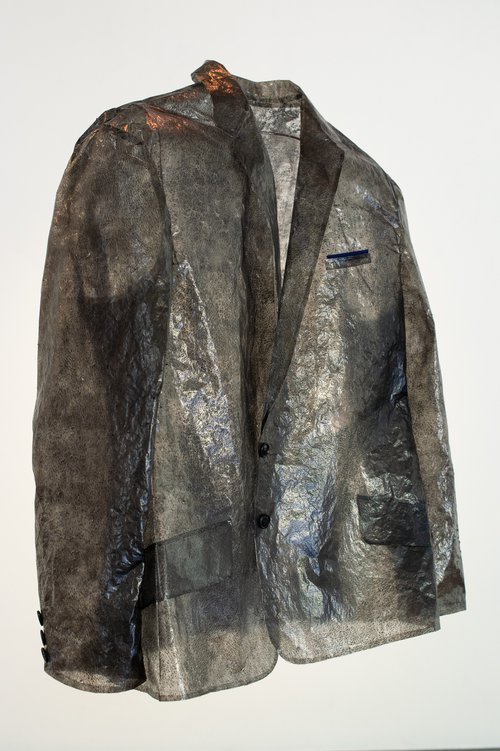 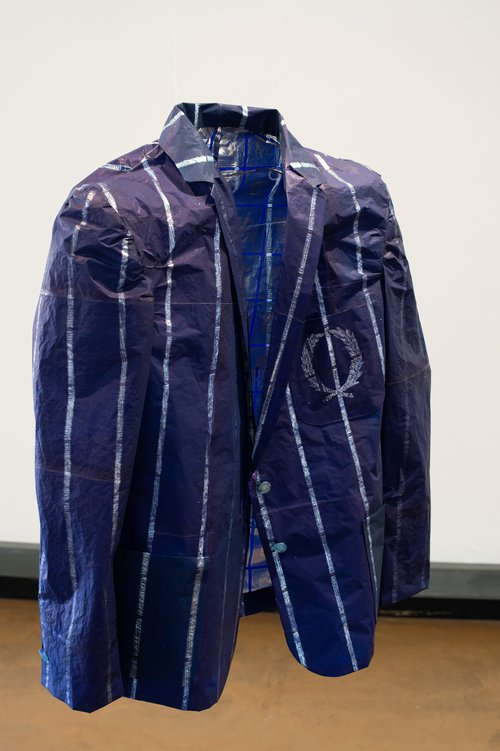