Willem Boshoff’s Blind Alphabet Project (1990 – work in progress) comprising more than 400 works, has been exhibited extensively in South Africa, Europe and the USA. This seminal work deals with the relationship between the blind and the seeing, converting the accepted advantaged position of the latter to that of the disadvantaged former.

The Blind Alphabet is an ongoing project transcribing a myriad of complex English words into tangible objects to be experienced and translated by the blind, to the sighted. Though usually marginalised within society, here the visually challenged are afforded the privileged position. Within the exhibition space, the blind explains the meaning of words, each represented sculpturally, to sighted visitors.

The sighted cannot see for themselves the morphological representation of each word, as it is obscured inside a steel cabinet covered by a mesh lid, with its definition presented in a Braille text on the lid. Within the usual art gallery space, the sighted may not touch the artworks on display. The Blind Alphabet project empowers the blind that may in this instance read with their hands and sense of touch, while the sighted may not.

Willem Boshoff is an advocate for the disadvantaged and culturally excluded, with the Blind Alphabet evoking societal inequality in relation to the visually impaired. Yet the work also questions how we perceive and claim knowledge. With the marginalisation, currently, of many lives amidst a deadly pandemic of global proportions, this work resonates also. Our lives have changed radically over the past few months with a shift to online learning and social media to sustain our personal and professional lives.

Within this context, Boshoff’s approach is profoundly merited as it calls for new measures of meaning and value in a fragmented and insecure contemporary society. The Blind Alphabet project prompts communication between people who would not normally converse on an even keel, but also exposes the disenfranchisement and disenchantment of minorities.

It contributes to the discourse on the consequences of a totalitarian reality by critiquing the accepted comprehension of traditional power structures. The work of this scribe/artist eventually stands as a monument to preserved memories: of objects and of ideas. Boshoff is the embodiment of an artist committed to engage with the social construct from which his inspiration is derived. 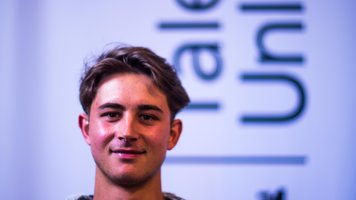