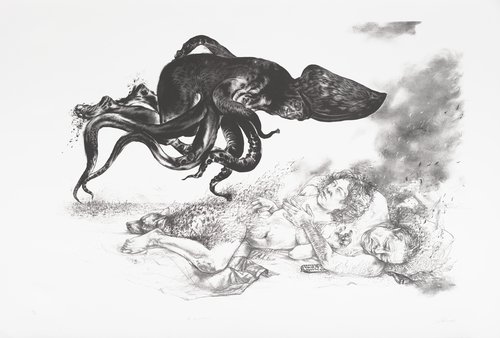 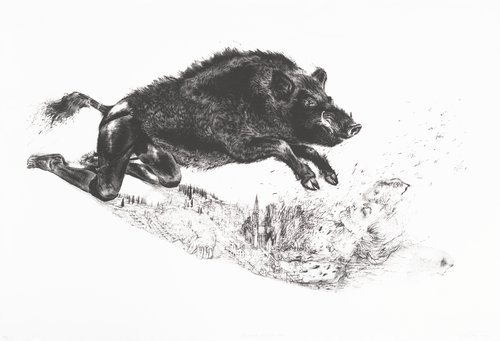 Diane Victor has been experimenting with the mixing of different techniques on stone, amongst them the traditional drawing approach together with the manière noir technique, at Francis van der Riet’s Atelier le Grand Village in the south of France.

“The meaning of the term manière noir is black process or manner”, explains Victor. “You start by covering the stone with bitumen and then use a subtractive process to scrape and make some marks into the bitumen to produce and effect similar to a mezzotint (middle tone) from which lithographic prints can be produced”.

“This is a rather complex technique” says Van der Riet, “during the whole printing process we have to be vigilant and adjust as the stone allow us to print its image on paper. The stone can fill in, the image can burn, it can become flat and tired….”.

Van der Riet, an actuary by training, moved to Paris at the end of the 1980s where he studied art at night school and etching and lithography at ‘The Art Students League’ in New York in 2003. He started the project of creating the stone lithography studio at ‘le Grand Village’, a hamlet in the south west of France in 2008 and the studio started printing in 2011.

Diane and Francis started working together on the Don Quixote project in 2014 and Diane has worked annually in Grand Village since 2016.