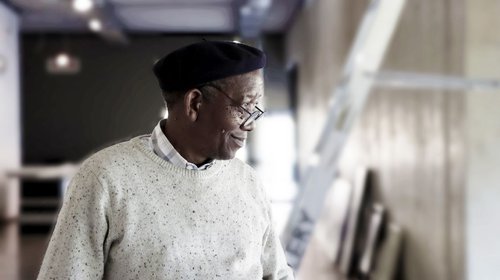 Kagiso Pat Mautloa was born in Ventersdorp to the west of Johannesburg in 1952. The Mautloa family moved to Soweto and settled in Mofolo when Mautloa was two years old. Here he received his primary and secondary education and he matriculated from Morris Isaacson High School in 1973.

Under the guidance of Dan Rakgoathe, Mautloa received art lessons at the Mofolo Art Centre in the 1970s, who encouraged him to develop his imagination through drawing. Mautloa then enrolled at the Rorke’s Drift Art and Craft Centre where he completed a Diploma in Fine Art in 1979.

Between 1981-1992 Mautloa worked in the Graphic Design Studio of the South African Broadcasting Corporation, and in 1992 he left the corporation and started practicing as a full-time artist. Working alongside David Koloane, Bill Ainslie, and other South African artists, Mautloa would go one to be part of the foundation of the Thupelo Workshops in 1985; these workshops would later become part of the International Triangle Network. During this period, Mautloa also taught at FUBA (Federated Union of Black Artists and played an instrumental role in the Thupelo Gallery. Between the 1980 and 1990’s, Mautloa religiously participated in numerous local and international artists’ workshops and programmes, which supported Black South African artists amidst apartheid censures.

In 2019, he was honoured with the Helgaard Steyn Award for Painting, which is presented to artists who exemplify a high level of artistic achievement and innovative leadership over an extended period. Mautloa has participated in numerous solo and group exhibitions and his work is represented in several important public collections in South Africa.

Mautloa is an urban artist, and he finds his inspiration in the streets of Johannesburg. He is a founding member of the Fordsburg Artists Studio, which is the precursor of the Bag Factory Artists’ Studios in Johannesburg. It is within the same studios that Mautloa’s studio continues to be located; filled with found objects which he collected on his walks throughout the city.

“His work studies the street life around him and his studio at the Bag Factory (Fordsburg Artists’ Studios) in downtown Johannesburg. The women roasting mielies (corn) over coal-fired tin braziers on street corners, the wholesalers and hawkers selling cheap imports from the Far East, the street traders who eke out a living with a few items on a small board near the busy intersections. Working with figurative elements, abstract textures and multiple colour overlays, the work exploits the potential of lithography. Mautloa has made innovative use of drawing materials for these prints, using found objects as stencils through which to spray tusche and toner. Textures are an important part of Mautloa's work, as he works, he notices the mundane surfaces around him and will sometimes use these in his work.

Unexpected things like the rough surface of a well-used cutting board, or a worn-out cotton rag, hold a new fascination and beauty for him. Delicate drawing and seemingly random splatter, entice the viewer and challenge one to look at the world in a new way. Kagiso Patrick Mautloa is an artist whose work eludes a neat definition, as he is as comfortable in his abstract work as he is in the more figurative imagery. Most of his work is in oils and acrylic but he has also included found objects and collage in his two-dimensional work and has also done a number of installations as well as doing photographic work.” (Bag Factory Artists Studio’, u.d.)