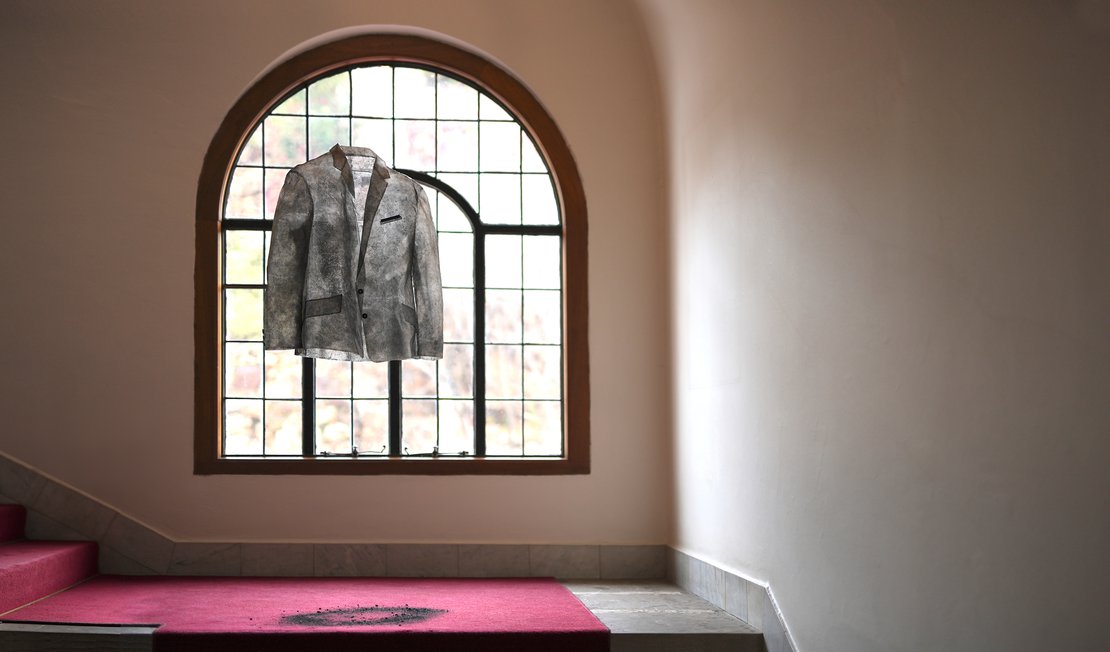 UJ Arts & Culture, a division of the Faculty of Art, Design & Architecture (FADA), together with celebrated artist and the first ever Ampersand Fellow, Paul Emmanuel, will open Substance of Shadows on 11 September 2021 at the UJ Art Gallery and UJ’s Moving Cube.

Inspired by the Human Shadow Etched in Stone at the Hiroshima Peace Memorial Museum, Hiroshima, Japan, this solo exhibition tracks his continued personal fascination with the tenuous nature of memory. “The only certainty is change. We try to hold onto memories in the hope of maintaining some coherence and continuity, but our memories are largely inventions, and they too change over time. We commemorate our invented pasts in an attempt to fix them in the present. We even impose them on the generations that come after us, linking them to the past through anniversaries, memorials, pilgrimages and rites of passage, in an attempt to bind their lives to ours. Ultimately, we know more about the grand narratives we create about the past than the past itself. We cannot hold onto the substance of the past. It has been recycled, re-purposed and reinvented. Our memories are poor, distorted, sentimental and superstitious copies,” he explains further.

Since 2014, Emmanuel has pursued a deep interest in the shadows of people that had been burned onto the ruined city walls by the heat and light of the atomic blasts on Hiroshima and Nagasaki – events that ended World War II. What remained were carbon shadows, ghosts of the past, fixed onto ruins in the present. This resulted in the 2015 exhibition Remnants which premiered at the Freedom Park Museum, Pretoria, South Africa. Substance of Shadows continues his pursuit.

“This research led me to the Pelindaba Atomic Research Facility north of Johannesburg, South Africa. There are rumours that the enriched uranium used for these bombs originated there. These rumours enhanced my sense of connection as a South African artist to Hiroshima,” he explains.

“I later had a dream, perhaps linked to this, in which I saw myself peeled from my own skin, as if I was discarding a burnt, blackened outer covering. This stimulated my ideas of scratching away a thin black layer from a piece of diaphanous, skin-like carbon ‘paper’ or film – the carbon paper, reminiscent of the burnt, soot-like residue left on the walls of Hiroshima and Nagasaki.

Although some of the works are essentially two-dimensional, Emmanuel gives them a three-dimensional quality, sometimes flat and hanging freely in the gallery or crumpled, torn, pierced and irregularly cropped. Most of the works are never displayed flat and always mounted in a way that allows ambient light to permeate the paper from both sides.

“These carbon ‘shadows’ are all metaphors for carbon copies and products of one of life’s greatest narratives – the carbon cycle” says Emmanuel of the exhibition. Using carbon paper as his medium, Emmanuel works from dark to light, delicately incising images into the fragile, semi-transparent film. He leaves the carbon residue to collect below the work as ‘discarded information’ or ‘lost memory’.

Emmanuel sourced the last roll of the now obsolete black carbon paper ever produced in South Africa and he experimented by scratching an image onto the film to see if the technique worked, practically, creatively and conceptually. The carbon paper was left unrecognisable, appearing like a delicate piece of fabric.

A further element to the exhibition, is a new video, titled Rising-falling (2021) exploring the symbolism, text and narratives of a memorial that still reflects colonial idioms to perpetuate a distorted perspective of history. “This extends my interest in how a society remembers its history and how changes in this memory can result in a dismembering of identity.

In this video, he publicly projects one of his existing video works, Remember-dismember (2015) onto the pedestal of an equestrian monument to Boer war hero and first Prime Minister of the Union of South Africa, General Louis Botha, which stands in the gardens at the Union Buildings in Pretoria, South Africa.

He believes that that Rising-falling (2021) “is an anti-monument that both disrupts narratives and temporarily intervenes in the experience of visitors to these sites. It presents a different view of masculinity, race and power by directly engaging the way texts and narratives have been imprinted on the landscape “.

Emmanuel was strongly influenced by his parents' frailty which forced him to confront his own mortality. His Lebanese-Catholic, Welsh, French, Belgian-Afrikaans heritage and ancestry informs the creation of the objects displayed in Substance of Shadows. There are deeply personal pieces such as the image of his father's inanimate body which, when incised onto the carbon paper, allows viewers and passers-by to see through it, letting them view the present through a ‘relic’ from the past. His mother's wedding veil is explored using the carbon paper for its formal and evocative conceptual qualities.

It furthers his exploration of memory first seen in his 2008 touring exhibition Transitions, which premiered at The Apartheid Museum, Johannesburg which depicted images, obsessively scratched into black, exposed photographic paper, of male rites of passage and his critically acclaimed short film 3SAI: A Rite of Passage. In 2009 this short, non-verbal, experimental film won the jury prize in the Short Film Competition at the 4th Africa-In-Motion Film Festival of the Edinburgh International Film Festival, UK and went to the Smithsonian National Museum of African Art in Washington.

This was followed by The Lost Men France installed adjacent to the Thiepval Memorial to the Missing of the Somme, northern France as an intervention in the Somme Circuit of Remembrance and the 2015 exhibition Remnants, which premiered at the Freedom Park Museum, Pretoria and toured to Boston University’s 808 Gallery, Massachusetts, USA in January 2016 and The Reservoir, Oliewenhuis Art Museum, Bloemfontein, South Africa in 2017.

The opening on 11 September 2021 will take place virtually on the UJ Art Gallery’s innovative online platform MOVING CUBE and will feature a virtual walkabout with Paul Emmanuel and Michelle Constant streamed from 11:00. Growing in popularity, the Moving Cube virtual platform offers audiences from around the world a chance to discover and connect with new artists and their work.

The physical exhibition held at the UJ Art Gallery ends on 2 October 2021 while the 3D virtual walkthrough can be viewed on Moving Cube until August 2022.

Due to the Covid-19 pandemic no public opening events will be hosted at the UJ Art Gallery during 2021. A virtual walkabout with Paul Emmanuel and Michelle Constant will be streamed online on 11 September 2021 from 11h00. To book your virtual seat or follow the live walkabout on the UJ Art Gallery’s Facebook page, click HERE.

The physical artworks can also be viewed in person in the gallery by appointment for the duration of the exhibition on Wednesdays between 09:00 and 15:00. Click HERE to make an appointment.

Physical walkabouts with the artist will be hosted on 15, 18 and 22 September and 2 October 2021 from 10:30 for groups of ten people. Booking is essential. Click HERE to book a place.

UJ Arts & Culture, a division of the Faculty of Art, Design & Architecture (FADA), produces and presents world-class student and professional arts programmes aligned to the UJ vision of an international university of choice, anchored in Africa, dynamically shaping the future. A robust range of arts platforms are offered on all four UJ campuses for students, staff, alumni and the general public to experience and engage with emerging and established Pan-African and international artists drawn from the full spectrum of the arts.

In addition to UJ Arts & Culture, FADA (www.uj.ac.za/fada) offers programmes in eight creative disciplines, in Art, Design and Architecture, as well as playing home to the NRF SARChI Chair in South African Art & Visual Culture, and the Visual Identities in Art & Design Research Centre. The Faculty has a strong focus on sustainability and relevance, and engages actively with the dynamism, creativity and diversity of Johannesburg in imagining new approaches to art and design education.

ABOUT PAUL EMMANUEL
Born in 1969 in Kabwe, Zambia, Paul Emmanuel graduated with an Honours degree in Fine Arts from the University of the Witwatersrand Johannesburg, South Africa in 1994. In 1997, The Ampersand Foundation made him the first recipient of the Ampersand Fellowship, New York, USA. His first solo show in 2000 opened at the Open Window Gallery, Pretoria, South Africa and in 2002 he was awarded first prize for AIR ON THE SKIN, in the Sasol Wax in Art Competition, Sasolburg, South Africa.

Born in 1969 in Kabwe, Zambia, Paul Emmanuel graduated with an Honours degree in Fine Arts from the University of the Witwatersrand Johannesburg, South Africa in 1994. In 1997, The Ampersand Foundation made him the first recipient of the Ampersand Fellowship, New York, USA. His first solo show in 2000 opened at the Open Window Gallery, Pretoria, South Africa and in 2002 he was awarded first prize for AIR ON THE SKIN, in the Sasol Wax in Art Competition, Sasolburg, South Africa.

Emmanuel employs various media, including photography and film, to reveal layered visions concerned with his identity living in post-apartheid South Africa. In 2004, Phase 1 of his series of unique counter-memorials, THE LOST MEN, was launched on the Grahamstown National Arts Festival main visual arts programme to public acclaim. In April 2007, phase 2 of this project took place in Maputo, Mozambique.

He was selected Featured Artist with his solo exhibition TRANSITIONS MULTIPLES for the FNB Joburg Art Fair in 2011 and in 2012 was granted the Institut Français Visas Pour la Creation residency in Paris, France.